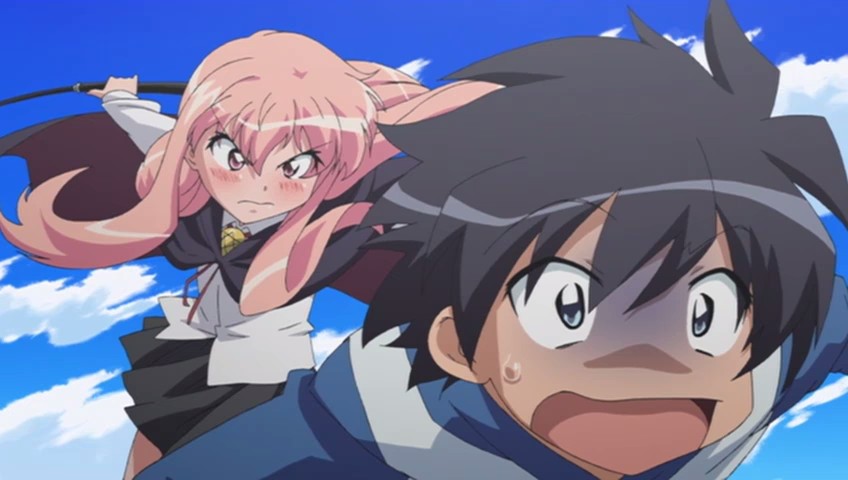 Welcome to Tired Tropes, in which I dissect popular tropes I find annoying. While tropes are tools, they can be overused or done badly, and Tired Tropes are especially gregarious examples of them. Here, I take on the tsundere.

The tsundere is a staple of Japanese media. She—for the overwhelming majority of tsunderes are female—is defined by switching between harsh (‘tsun’) and lovestruck (‘dere’) personalities, due to how she feels towards a love interest and her reaction to having these feelings. While Tropes are Not Bad, it takes great skill to properly utilise tsundere archetype, and many, many, many creators have failed to do it properly.

When people think tsunderes they think Type A tsunderes: harsh and aloof as her default setting, but sweet or vulnerable towards her love interest…eventually. And by ‘harsh’ I mean abusive. Examples abound in media: Louise Francoise le Blanc de la Valliere from Zero no Tsukaima, Ayatsuji Tsukasa of Amagami, Kirisaki Chitoge in Nisekoi, and so on.

Type B tsunderes, who have dere as their default setting, are also abound, but I haven’t encountered (too many) problems with their portrayals. This post will focus exclusively on the ultra-Type A tsunderes: the abusive types.

In the real world, abuse has consequences. It inflicts horrendous psychological damage on the victim over time. More assertive individuals would simply refuse to have anything to do with such people, or turn to the authorities (or arrest them, if they are the authorities). In fiction, for some reason, abuse is rewarded with love.

Louise physically and emotionally abuses Hiraga Saito throughout the entire series, including berating him, whipping him and punishing him whenever she gets jealous of another girl who talks to him—and they become the official couple. Ayatsuji blackmails Tachibana Junichi into helping her by threatening to accuse him of sexual assault when he accidentally picks up her diary—and in her route she becomes his lover. Kirisaki Chitoge is abusive, haughty and violent towards Ichijou Raku, especially in the early chapters—and he falls for her anyway.

Writing is about truth. Tropes are a tool to point the reader towards truth. And the truth of the world is that if a woman were arrogant, abrasive, manipulative and outright violent towards anyone, she is not girlfriend or wife material. This is a clear indicator of intimate partner violence—better known as domestic violence. And yet the relationships described above are portrayed as loving relationships.

Consider what would happen if the gender roles were flipped: if male tsunderes abuse their female love interests. There is no expectation that the relationship would end well. Yet this portrayal of female tsunderes endures. After all, Abuse is Okay if it’s Female on Male.

This is not to say that the tsundere archetype should be abandoned, rather that it should be deployed with skill.

Instead of playing abuse for laughs, especially in a serious work of fiction, it should be explored to the bitter end. Unflinchingly explore the consequences of being around someone who switches between harsh and sweet at the drop of a hat. The result is confusion, a tendency to walk on eggshells around her, and a dysfunctional relationship. More assertive characters will stand up and put a stop to such nonsense, or ruthlessly cut out these people from their lives.

If the tone of the story is comedic or light-hearted, downplay the violence or abuse to the point where it won’t actually harm anyone. Imagine the female lightly punching a male’s arm or softly bouncing her fists against his chest without actually hurting him, or limiting the use of insults and retorts. This provides insight into her character without crossing the line. Or, as in the case of Kaze no Stigma, the female may be lashing out at the male with full force, while the male easily avoids or no-sells the attack with boredom or amused mastery. In either event, it is immediately clear that what happens isn’t abuse, as it doesn’t actually affect the target in any meaningful way.

If the male does have a background in martial arts and/or a profession that requires the regular use of force (soldier, mercenary, police, etc.), show the real-world results of attempting to abuse that person. Force will be met with force, dodged or redirected. These are survival mechanisms, so deeply ingrained that they cannot be turned off so easily. Such people will also have no tolerance for abuse: either the tsundere shapes up or is dropped.

An example of the Type A tsundere romance done right is Steins;Gate. Makise Kurisu is a classic Type A tsundere, who developed her acerbic tongue after being looked down on for being the youngest scientist in her lab. Okabe Rintarou roleplays a mad scientist all the time, to the point where nearly everyone thinks he acts like a twelve-year-old, and also displays classic tsundere characteristics. Unlike other media, the character dynamic is both hilarious and realistic, thanks to the way it’s handled.

While Makise and Okabe bicker over literally anything, their interactions showcase both chemistry and growing respect for each other. Makise maintains her tsun side by talking in scientific terms when annoyed, acting cynically towards Okabe, and (in the Japanese version) by using rude forms of address, while reserving her ultra-tsun moments for times when it’s justified—such as reacting to a perverted joke about her, usually with a sharp remark. And she doesn’t abuse people who don’t annoy her, like Shiina Mayuri. Okabe, in turn, feeds off her energy, responding with aplomb and genuinely hilarious comebacks.

Most importantly, when the chips are down and push comes to shove, Makise drops the tsundere act. She demonstrates her brilliance as a scientist, supports Okabe through difficult situations, and acts as a loyal member of his lab team. In this sense, Makise is more than just a two-dimensional character; she is a complete character who drives the story. And in the end, she (mostly) drops the tsun act and acts more affectionately towards Okabe.

Looking at Steins;Gate we see an instance of effectively deploying a Type A tsundere without alienating the audience. She doesn’t go overboard with her harshness, or when she does it’s met with resistance. She shows character development over time instead of flipflopping back and forth. Most of all, she is more than just an archetype: she contributes meaningfully to the story, becoming more than just a set of clichéd behaviours.

The tsundere archetype in of itself is not bad. But when poorly handled, it is a portrayal of female abuse and generates violent dissonance with the truth of the world. Properly crafting a Type A tsundere requires careful calibration of her character, showing her harshness without crossing the line into unchecked abuse, while giving her opportunities to be more than just a cliche.

4 thoughts on “Tired Tropes: the Tsundere”