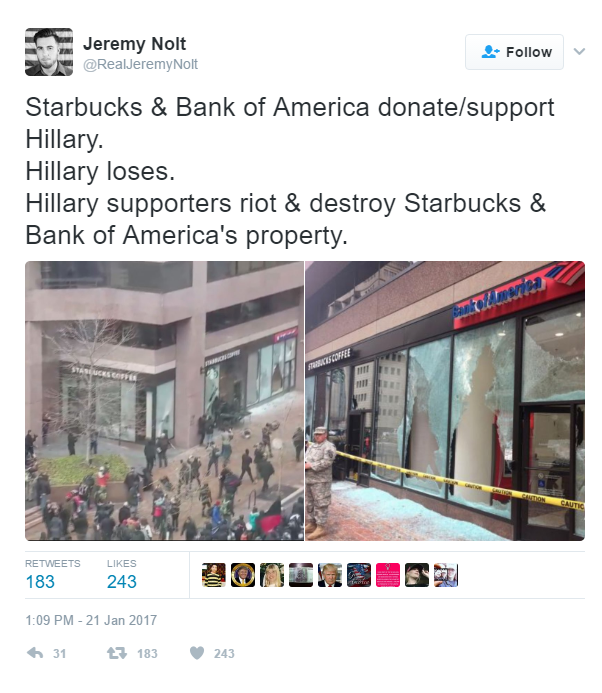 They are not the same. I can’t tell if it’s willful ignorance of history or deliberate distortion of the record, but when dealing with the far left, there is no difference.

By drawing comparisons to the Boston Tea Party, the Left is attempting to legitise wanton acts of destruction and rioting. They are attempting to create a narrative to justify future riots, the same kind of riots seen in Ferguson and Baltimore. But the Tea Party is not the same as a riot.

The primary target of the Boston Tea Party was the East India Company, a government-granted monopoly that benefited directly from the Tea Act passed by King George.

When the Sons of Liberty boarded the Dartmouth, Eleanor and the Beaver they destroyed the tea — and only the tea. They did not sink the ships. They did not attack the crew. They did not lay waste to the port.

It was a deliberate, focused act of violence aimed at property, with a government-linked monopoly as the primary target and the government itself as the secondary target. It did not involve anyone who was not a beneficiary of the Tea Act. Even so, the Sons of Liberty — and everybody else, including their allies and sympathisers — recognised that the protest itself was illegal. The colonial government did not suppress the Tea Party because the colonial government supported the cause, not because the protest was legal.

The Boston Tea Party itself was the culmination of decades of colonial frustration with the British government. The colonials believed it was not fair for King George to levy taxes on the colonies without granting them representation in Parliament. They saw King George and Parliament as remote rulers far removed from the goings-on in their lands, utilising taxes and the Regulars to keep the colonials in check. Despite decades of arguments, London did not budge. Taxation without representation was the order of the day. When the Tea Act passed, it undercut the livelihoods of colonial tea merchants while propping up a government monopoly on the brink of collapse. It was the straw that broke the camel’s back.

The Black Blocs of Washington

Now contrast this with the riots in Washington, fronted by the infamous Black Bloc.

This is in no way comparable to the Tea Party. The Tea Party did not deliberately attack people. The Washington rioters attacked police officers, and smashed windows and torched cars belonging to private businesses and individuals unaffiliated with President Donald Trump or the Federal government.

Disrupt J20 was an excuse to indulge in random acts of gratuitous violence. The rioters didn’t target anyone or anything belonging to Trump or his administration. They simply attacked ordinary Americans who live in a city that overwhelmingly voted against Trump, a President who has not done significant anything yet.

Think about that: the progressives, anarchists, antifascists and other groups were attacking their own supporters, in a country that prides itself on freedom of speech and peaceful assembly. Instead of peaceful protests and petitions in a nation known for responding to such methods, the rioters indulged in violence.

The Washington riots had far more to do with the Stamp Act riots than the Tea Party. And the Stamp Act rioters, it should be remembered, were so destructive that the Founding Fathers sought to distance themselves from them.

To be fair, the Boston Tea Party and the Washington riots have one thing in common: they were both acts of political violence.

Political violence rots the body politic. It is an irrevocable step towards chaos and bloodshed. Mob violence signals to everyone that the political process has failed, and it is time to unleash the beasts within. History tells us that mob violence is the death of liberty, democracy and civilisation. From the fall of the Roman Republic to Byzantium during the Imperial Exile, the French Terror to the Cultural Revolution, mob violence is a symptom of coming chaos.

The Boston Tea Party irrevocably led to the American Revolutionary War. America looks fondly upon the Tea Party today because America won the war. Had the British won, the textbooks and the popular narratives would be far different indeed.

The Washington riots allow Progressives to tell themselves that mob violence is acceptable, and a preferred tactic in future controversies. But this is a delusion. The riots also tell the Hard Right what to expect when the Progressives come for them.

I have seen discussions of armaments and tactics among the militant right. They are ready and willing to inflict bloodshed on a scale beyond what the Left can dream of. The Left calls for gun control, safe spaces and feminism; the Right believes in gun ownership, training and preparation. The Progressives may bring boots and clubs and stones; the Hard Right will wield AR-15s and Molotov cocktails and IEDs.

If the culture war goes hot, who do you think will win?